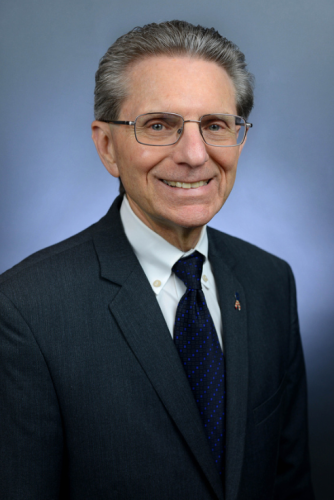 Roger was born and raised in South St. Louis City near the iconic Bevo Mill landmark, the youngest of three children of the late George and Gladys Richie, a letter carrier and stay at home mom, respectively.

After working at a large south St. Louis funeral home for 10 years, Roger founded a professional embalming and crematory company working 12 years for funeral homes only and then joined John L. Ziegenhein & Sons Funeral Homes in 1994. In 2006 he became President / Owner.

Roger is married to Linda Henry and has three adult daughters and five grandchildren. At home, Linda appreciates Roger doing all the dishes and making a pot of fresh coffee early every morning.

He grew up in the Christy Methodist Church by Bevo Mill and is now an active member of Concord Trinity United Methodist Church in South County. After work, time is filled with church and family activities, reading (especially motivational materials) and watching special television programs. He has been a member of the Mehlville Optimist Club since 1978.

Roger has always been passionate about funeral service, believing every life is important and needs to be honored. At death, family and friends need to gather to remember and celebrate their loved one and create an opportunity to share love, remembrances and life experiences. 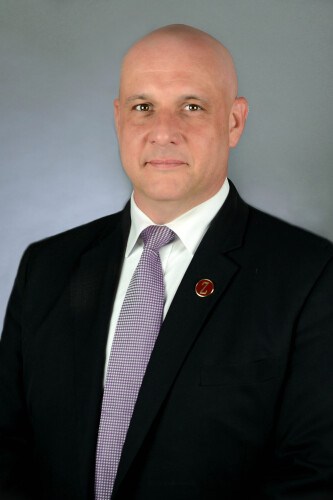 Dustin grew up in Godfrey, Illinois and graduated Alton High School in 1995. He is also a graduate of Lewis and Clark College and Worsham College of Mortuary Science. With of over 20 years of experience in all aspects of funeral service including burial vaults, crematory operations, preparation of the deceased, as well as, cemetery and funeral home management, and extensive knowledge of prearranged funeral plans, he can meet any family’s needs to help them honor their loved one.

Dustin resides with his wife, Kelly, 2 daughters, Lola, and Eleanor, and 3 dogs in Affton, Missouri. In his free time, he enjoys golf, trivia, attending his children’s activities, and has, along with his wife, a self-described St. Louis Blues Hockey addiction.

Dustin believes that the greatest responsibility he has is to make a significant difference in lives of the family’s he has the privilege to serve during one of their most difficult times. 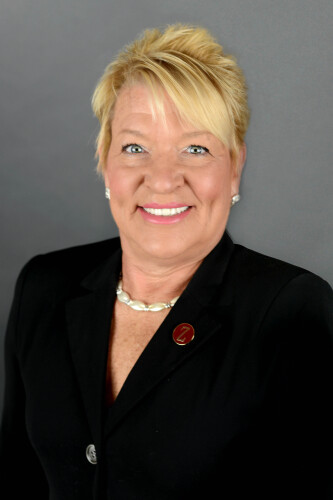 Debra has been serving families, by assisting them with setting up intentional prearranged funeral and memorial plans, for the past 12 years.  It is always an honor to provide the peace of mind to families before and after a passing.  With strong Midwestern values and the desire to provide the highest quality of service, she looks forward to continuing to provide answers and assist with fulfilling the emotional, relational, and spiritual needs of our Ziegenhein and Sons families.  In her off time, she enjoys her family,  travel, SCUBA diving and music 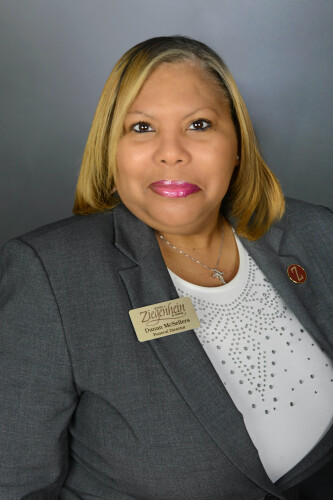 Danan G. McSellers was born in the city of St. Louis, MO.  while being raised in Webster Groves, MO and south city St. Louis, MO.  Danan is the eldest of two children, whom of which were born to Shirley Watson and Daniel McSellers.

Danan attended the Webster Groves school distract graduating from Webster Groves High School, where she was crowned Friendship Queen of 1992.  After high school, she then proceeded on to attend Gupton Jones of Mortuary Science in Atlanta, Georgia.  In June of 1994, she soon after became a licensed funeral director.

Danan is the 5th generation of her previously owned family funeral home, S. J. Watson Mortuary.  S. J. Watson was established in South City St. Louis in 1913.  She is also the eldest granddaughter of the late H.D. & Thelma Watson also Daniel & Maxine McSellers.  Growing up in the funeral home, she has assisted her grandmother and mother alongside two of her siblings, Otis Hudson and the late Daniel W. McSellers, Sr. since the tender age of 9 years old.  Danan has also coordinated the infamous ‘Let’s Get Acquainted’.  She has also found that being a funeral director is a ministry of its own and it is her calling to help grieving families in their dire time of need.  After the family business officially ceased in 1992, Danan then went on to work throughout the St. Louis Metropolitan, Cedar Hill & Bonne Terre area as a director with other funeral homes until joining John L. Ziegenhein & Sons August 6, 2019. 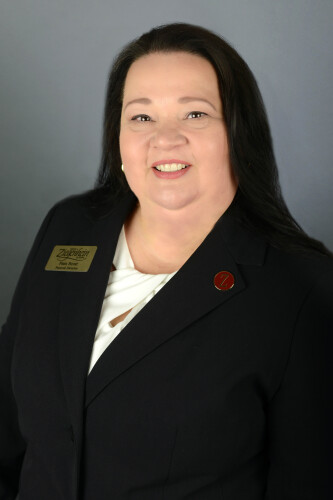 Pam received her Funeral Directors license in May 2017 after completing her apprenticeship in Cedar Hill, Missouri. She started with John L. Ziegenhein & Sons in January 2020. Prior to joining the funeral industry, Pam schooled her children at home. When they left for college, she found work as an assistant supervisor and trainer in a St. Louis Call Center. After experiencing a tragic loss in her own family, Pam became interested in helping others in their time of need. Her heart is to be present, to guide and to support the families she serves with excellence.

In her free time, she enjoys camping with her family and spending time with her five grandchildren. 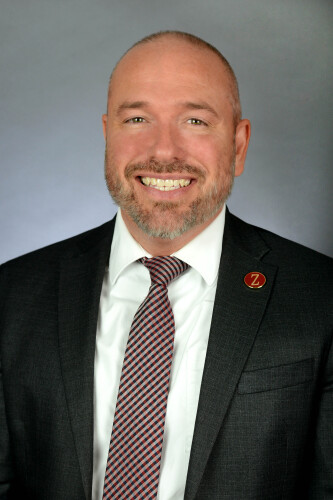 Steve was born and raised in the St. Louis area. He is married to his wife Debbie who is a teacher in the Oakville community. Steve and his wife Debbie have three children.

Steve’s passion is to love and serve people. He is grateful to be able help people in their time of need by serving in the funeral business. 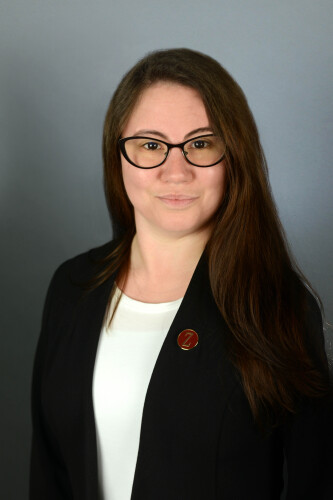 Andrea was born and raised in St. Louis, Missouri where she graduated from Oakville High School. She is also a graduate of the University of Missouri where she pursued her degree in Criminology and Criminal Justice, with an emphasis in criminal analysis. In late fall of 2019, Andrea made the decision to switch career fields and joined the Ziegenhein family. She is the third generation of her family to work in funeral service, following in the footsteps of her grandmother and mother.

Andrea currently resides in south St. Louis. In her free time, she enjoys hiking, yoga, activism and spending time with her close friends and family. 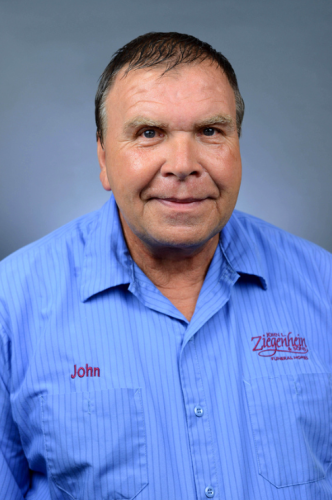 John was born and raised in South St. Louis City in the historic Soulard Neighborhood, the forth of nine children, to the late Lawrence and Wanda Justice, who both worked as laborers.

He attended Humbolt and Lafayette Elementary Schools and McKinley High School. After working as a maintenance specialist for a north county funeral home for eighteen plus years, John joined John L. Ziegenhein & Sons Funeral Homes in 2001.

He enjoys family time, playing games, television and fishing. He is married to Tina (Barton) Justice and has one adult daughter.

John, better known to his friends as “JJ,” loves people and enjoys helping them through difficult times by his service in the funeral business. 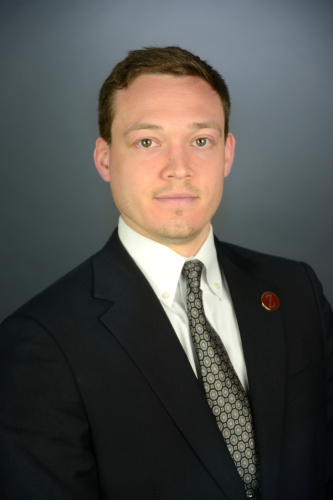 Nick was born and raised in Saint Louis City. He graduated from De Smet Highschool in 2014 and immediately pursued an education in Mortuary Science and Funeral Services at Southern Illinois University of Carbondale. After Graduating with a bachelor’s degree in 2018, Nick began his funeral career as a funeral director and Embalmer. In December of 2021, Nick became a member of the John L. Ziegenhein Funeral Team.

After experiencing a tragic and sudden loss at the age of 15, Nick became more familiar with the funeral industry. In the following years he would be driven towards becoming an embalmer and funeral director through his talent of art as well as his passion to help others. Once he became a fully licensed funeral director and embalmer, Nick became determined to make a positive impact on the industry and the people around him.

Outside of work, Nick can be quite the handyman, whether it is building something new or repairing something that needs fixing. Additionally, he is also a writer who is most known for his poetry consisting of sad memorial poems, comical stories and inspiring themes. Likewise, Nick also enjoys putting a smile on people’s faces and often does so by making people laugh. He also does a lot of cooking with an emphasis on healthy foods. Furthermore, he also exercises daily doing activities such as weightlifting, abdominal exercises, running, biking, and active sports. As an artist, Nick also finds time to sketch portraits on occasion. He is also an avid reader and enjoys a variety of topics such as mythology, history and science. As a man who enjoys the outdoors, Nick likes to feed his local birds and admire the beauty of nature while taking long walks.